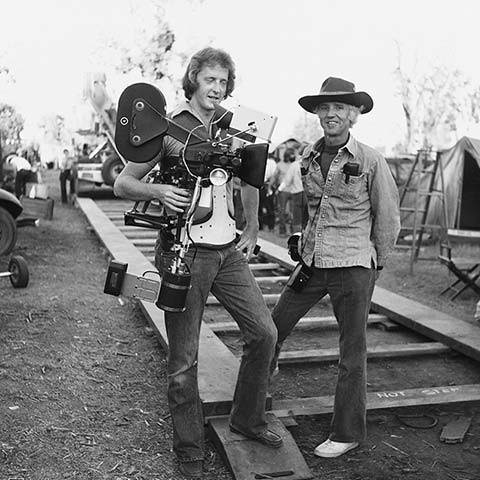 Garrett Brown is best known as the Oscar-winning inventor of the Steadicam®. He has operated Steadicam on nearly 100 movies including Rocky, The Shining, and Return of the Jedi. Garrett holds 50 patents worldwide for devices which include the Steadicam Merlin, a smaller, handheld Steadicam for camcorders; Skycam, the robot camera that flies on wires over sporting events; and Mobycam, Divecam, Flycam et al that pursue athletes worldwide. His new zeroG technology “floats” tools and reduces workplace injuries. In past lives Garrett has recorded for MGM as a folksinger (www.BrownandDana.com), sold Volkswagens, directed TV commercials and made films for Sesame Street, and his voice was the other half of that well-known ad-lib duo on radio for Molson and American Express (www.TwoVoices.com*). He is a member of the American Society of Cinematographers, the Directors Guild, the Screen Actors Guild and the Academy of Motion Picture Arts and Sciences. Garrett has just been inducted into the Sports Broadcasting Hall of Fame. 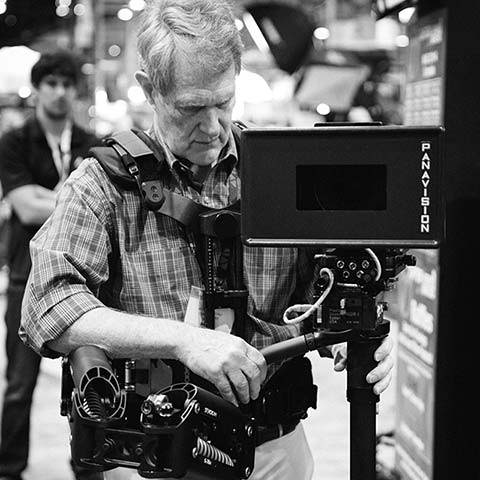 Jerry Holway got his first taste of filmmaking at the age of five when Margaret Mead came to his house in Connecticut and tested out her Bolex on him before heading off to the South Seas. Jerry made his first 16 mm film in high school, ended up with a film degree from Cornell University, and started making documentary films before graduating. For several years Jerry worked on documentaries, industrials, and political spots, and earned a Master’s degree from Northwestern University. Jerry learned how to operate a Steadicam in 1982 while he was teaching filmmaking at Penn State. Several years later Jerry left teaching to become a freelance camera operator, specializing in Steadicam. In 1991, Garrett Brown invented – and with Jerry, developed – Skyman™, the first of several low-tech “flying Steadicam on a wire” devices that Jerry owns. Jerry has been the head instructor at over 100 Steadicam workshops since 1990 (Philadelphia, Malibu, Scandinavia, Atlanta, Istanbul, to name a few) and is the author of the Steadicam Workbook, The Steadicam EFP Manual and Videotape, The Steadicam Ultra manual, and The Dynamic Balance Primer, and The Steadicam Operator’s Handbook. Jerry also wrote many articles for and was the editor and publisher of The Steadicam Letter. 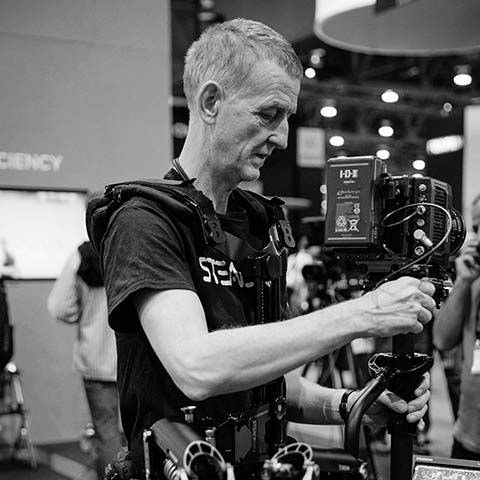 Chris Fawcett is a Steadicam Operator and Cinematographer with 30 years of broadcast and film experience. He was trained on the streets of Belfast, graduating from AC to Camera Operator for BBC Newsnight. In 1998, he became a film and TV documentary DP, shooting mountaineering footage on Aconcagua at 7,000 meters. In 2003, a passion for camera movement led him to Steadicam. He now specializes in the aesthetics of camera movement, filming and teaching worldwide. His feature film, Let Each One Go Where He May—a series of 10 ten-minute continuous Steadicam takes, shot in the heart of the Amazon Rainforest—won Best Film at 5 international film festivals, attracting high praise for his cinematography. Chris is the author of Steadicam Posture, co-inventor of the Steadiseg, the 3rd generation Steadicam Segway, and inventor of the Exovest, an exoskeletal support harness for Steadicam. Robin Thwaites originally studied and had a career in stills photography but started his association with Steadicam whilst working for London company OpTex in 1986 progressing to assisting at the first major residential Steadicam workshop with the late great Ted Churchill in 1987. This was followed up with a second similar event in 1988.

Following that Robin started short familiarization courses to help the OPTEX rental department which then transitioned into the formal OpTex three day workshop which were held at least three times a year for the next 14 years or so. In his time at OpTex Robin ran many location workshops in the UK including bespoke workshops for various production companies and also took these overseas to places as diverse as Lebanon, Finland, Russia, Ireland, Switzerland and Iran.

On moving to work for The Tiffen Company in 2006 Robin continued the three-day workshops for a whilst forming an association with the BBC Training Centre at Wood Norton. During this time Robin evolved the concept of Bronze, Silver and Gold workshops dependent on duration and equipment used and evolved the syllabus for the Bronze and Silver workshops later to be ratified by Steadicam inventor Garrett Brown. In his time at Tiffen Robin has acted as course organizer and coordinator for Gold Workshops held in England, Turkey and Egypt bringing in talented operators as instructors such as Paul Edwards, Roger Tooley, Peter Robertson, Peter Cavacuiti and more. Additionally he taught at various Gold workshops alongside Garrett as well as Jerry Holway and Chris Fawcett in many parts of the world hosted by Tiffen Steadicam partners. Again this has involved travel to a range of countries from the USA to Russia and then in Asia including Malaysia, Japan and also under the shadow of the Great Wall in China. 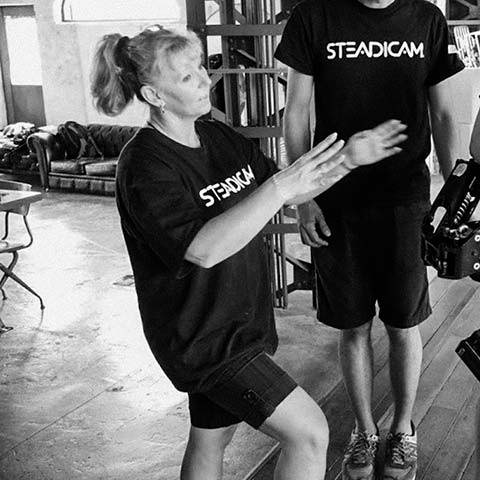 Danny originally qualified in Lithography and Mechanical Engineering with London City & Guilds, and worked in the Print Trade for a number of years. His deep interest in Film Production and background in manufacturing led him to take a position with Tiffen International in 2006.

He has since been working around Steadicam® for 16 years joining in the same year as his colleague, Robin and attended his own first 3 day workshop at the BBC Wood Norton Studios in 2006.

Now working alongside Robin Thwaites at Tiffen International primarily on the Motion Picture side of the business, he has helped expand the Steadicam Workshops into the well-known Bronze, Silver and Gold formats now known throughout the UK, Europe and beyond as an organizer and key instructor in each of the standards. He also rolled out the concepts to numerous Universities and Film Schools including the SAE across Europe, and still “Trains the Trainers” with how to teach Steadicam.

Alongside Robin, and the esteemed Garrett Brown, Jerry Holway and Chris Fawcett, and many other well known local professional operators with International workshops organized with local partners. He's been on the instructor line up at Gold Workshops such as the Malibu Classic USA, Tenerife Gold, Turkey Gold, Denmark Gold, UK Gold, Gran Canaria – Gold, Australia, the UK, plus countless Bronze and Silver courses to date.

Rebecca (Bex) has been shooting professionally in New Zealand since the 1980’s. She attended Garrett Brown and Jerry Holway’s 2002 US workshop and has been a working Steadicam Operator ever since. Her experience includes live television such as ‘Dancing with the Stars’, Live Sports, ‘World of Wearable Art’ Awards, Official Public Engagements, Film Premieres, Concerts and much more. Bex instructed alongside Garrett and Jerry at the Australian and Malaysian Gold workshops in 2011/2012 and while she enjoys working locally, she loves instructing and is looking forward to leading many more workshops. She is passionate about the craft of Steadicam and thrives on seeing the progress and success of her students.

To operate the Steadicam is like doing a dance, structured but with finesse and yet able to tell a story. Although Zhong Wei is not a dancer by nature, with Steadicam he is able to move together as if he is one with the camera. Zhong’s interest in the art of the moving camera sparked in 2009. Being technically eloquent with various camera formats, Zhong Wei is able to perform to his fullest potential even in the most demanding situations. Based in Singapore, he has collaborated with Directors and DPs both locally and internationally including work in areas such as Taiwan, China, Malaysia, the United States and the United Kingdom. As a firm believer of education, Zhong Wei has been an instructor on several Tiffen Steadicam-accredited workshops since 2013. Being fluent in a few languages including English, Chinese and Cantonese, has brought Zhong to the Philippines and China to instruct in the Steadicam Bronze and Silver workshops, educating and inspiring many other Steadicam operators alike.